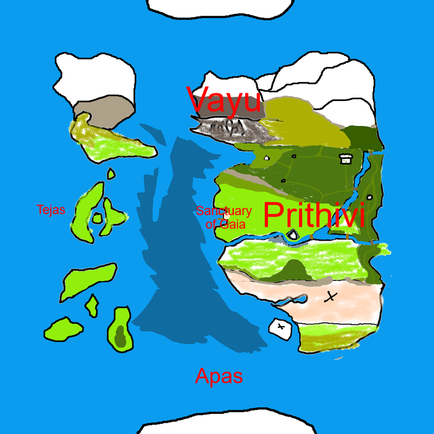 My definitely not permanent and mostly just for visualization map of the World of Eden.

Eden is a story about a world that used to be absolutely amazing and full of potential. It is very much like our world here on Earth. The name Eden was inspired of course, by the Garden of Eden but with my own spin on it. People used to get along and live together harmoniously but like us, were given power that they didn't know how to manage or keep in balance. This eventually separated the people and led to disharmony and war. The story is about Four different but very similar Nations that fight each other to survive but need each other to thrive. One nations leader, Mother Gaia, knows this and makes an effort to reunite the Four Nations at the Sanctuary of Gaia in an attempt for a better life. Zero, one of Gaia's supporters has found traces of something called 'Ether' and he believes that with it, they can stop the wars and reunite the Four Nations of Eden once more.
Key Points:

1.
People can bend Elements to their will.

Solid and Steady Progression in Bending Capabilities is delivered as well. Finding Balance & Harmony is the underlying message behind the story.

2.
The World is Magical but everything is very well explained.

Things make sense and progress accordingly. There are very few holes, if any. The world feels like it could be real and is incredibly immersive. This makes it easier for the reader to relate.

All of it makes an entrance - but with a twist!


Example: Characters - Arthur & Merlin. The Twist: Arthur is Old and Merlin is Young.

Example: Titles - Instead of King, Queen, Prince or Princess, we have: Father, Mother, Brother and Sister as Honorific Titles.

Example: The Philosopher's Stone - The Twist: Made of the 4 Elemental Stones Combined.

The Spirit of Balance: 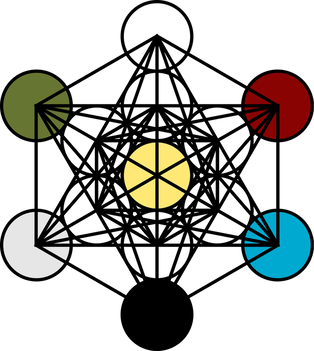 The mission for Eden is to be more than just a story. Not only is the goal to provide an amazing story and world to explore but it is also to inspire. It's to inspire people who read it to overcome their differences and see that we are all apart of a whole. We all need each other to survive and especially so to thrive.

One of the main points made throughout The Books of Eden is finding Balance in all things. When things are Unbalanced you find Disharmony is quick to occur, but when things are in Balance, Harmony, instead is easier to be found. All parts of the whole need to be taken care of for the whole to remain in balance and thrive.

In the World of The Books of Eden, Eden can be considered the Whole and the Four Elemental Nations the Pieces that Make it.

The biggest challenge for people in the story is to find and maintain their own balance and strive for harmony so that Eden can not only Survive, but also Thrive.

Here soon, I even plan on writing Articles and Making Videos about finding Balance and Harmony in Your Own Life!

Can you figure out what language this is? Prithivi, Vayu, Tejas and Apas are all from a real-life language that is considered by some, the highest-vibrational language to exist.

Again another Key Point to the story is just bringing all of the coolest things in life into one world.

My original intention with this story is to make it a video game. Growing up playing games like Runescape, Guild Wars, World of Warcraft, etc., I always wanted to make my own video game. My reason for this is that I got bored with those video games after a while. Why? Because I feel like they all lacked a sense of realism; A world that had very few holes or broken lore. I don't want to play a game that feels like I'm playing a game, I want it to be an experience so real, that I can get lost in it. That is why I am starting with the story. The story is one of the most important parts of creating a world that feels real. It needs to have it's own unique world laws and it needs to have solid, slow but steady, progression.

Let me explain some more.

Runescape:
Runescape has a Realistic Skill System (Old School Runescape), a Realistic Questing System, but the Story is Lacking a Killer Foundation. This game almost did it for me guys, no really, it got near close. I liked pretty much everything about this game, except, it's missing a key point: World Laws. Magic is just there, there is no reason for it, no story to explain it at all. As is true for a few other skills, they just aren't explained well if at all. I really like understanding the world I am in, it makes it feel more real. This is what I wish to deliver with Eden.


World of Warcraft:
Great Game, poor realism. Why? There is no Foundation for Progression and the Story is Broken. There really isn't any true experience gaining or leveling up. The skill system could use a re-haul to actually feel like your progressing well; Think Old-School Runescape. The questing system in WoW is horrendous. I don't even need to explain this do I? Sure, it's gotten better but this is where I hand it to Runescape, it nailed the questing system. Don't write books as the way for the lore to be explained or don't put the lore on a website outside of the game for it to be explained. USE THE LORE IN THE GAME. Make the Quests TEACH the LORE. That is how you bring realism to a world. Keeping people in the world lol, not making them break for a read and tea. And so now you're probably wondering why I'm writing a book then and not making a game with the lore in it, huh? Great point!

My Answer:
I'm only a one man Shou, *cough*, please forgive me. To the point, I need more people. I need to create the world and no better way than writing the story for people to see it! And if people see it and they like it, it can lead to it growing and expanding into perhaps a video game one day! Woo!

If you trust me from just reading that little bit, (wow I'm flattered, really, thank you!) See The Game section for way more in-detailed stuff that I would want to put into this game and what I am planning on putting into the Books of Eden.

Goals for
The Books of Eden

1. First and Foremost
I wish to complete the online experience of delivering the books in blog-format with original and high-quality graphics. This by itself, is an incredible experience alone. My goal is to finish these four books within the next five years, so by 2024. This could be sped up depending on the support I receive from Patrons like you! Thank you again! :)

2. Second
Once The Books of Eden are successful, I have plans for three more books which by then will only continue to expand the world and probably excite a whole bunch of people who are reading it. While writing these books, I will put emphasis on marketing and creating hard-back, pleather copies for those who want a physical copy of the books.

3. Third
My goal would then be to turn this series into some type of animated or live-action adaptation. Once that is successful, with the core and foundation of the book series crafted specifically to be adapted as a playable video game - I would be seeking game designers.
F.A.Q.
Click to read
Q: Do you draw your own Characters?
A: Yes.  I'm not the best at drawing but I have a little skill.  So far, all of my characters I have drawn.  If you are interested in helping me out and would like to draw my characters for me / want your own work displayed here, I am open to working with you!  Contact Me below for more details.

Q: Do you design your own Graphics / Website?
A: Yes, actually I'm quite skilled in graphic design and website design (at least in weebly lol).  Nearly all Graphics, except for a few 3D Models and Clip Arts, you see here on the site including my Logo, Book Covers, and Graphics included in the Chapters were designed or edited by me.

My name is Shou. (Sho)
I'm an incredible person and so are you!  It's nice to meet you!
Just read the story and if you like it leave a comment and share it with your friends!
Thank you! :)


Or just stare at my beautiful face all day, whichever floats your boat. 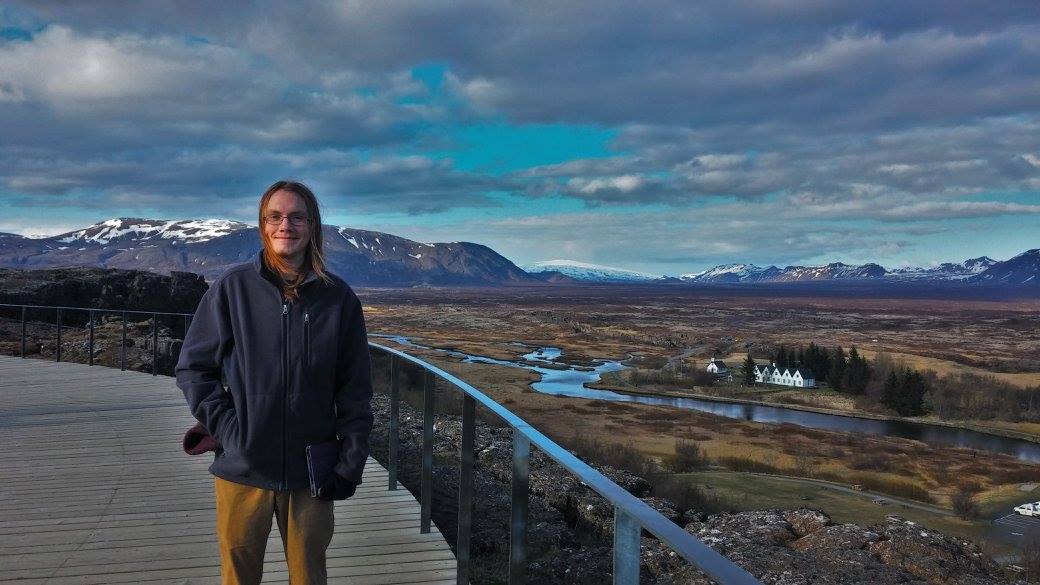 Travel the World guys, it really broadens your perspective.
Anna Sóley, if you're seeing this: You take great photos and you are an amazing person, I hope you are well.
:)